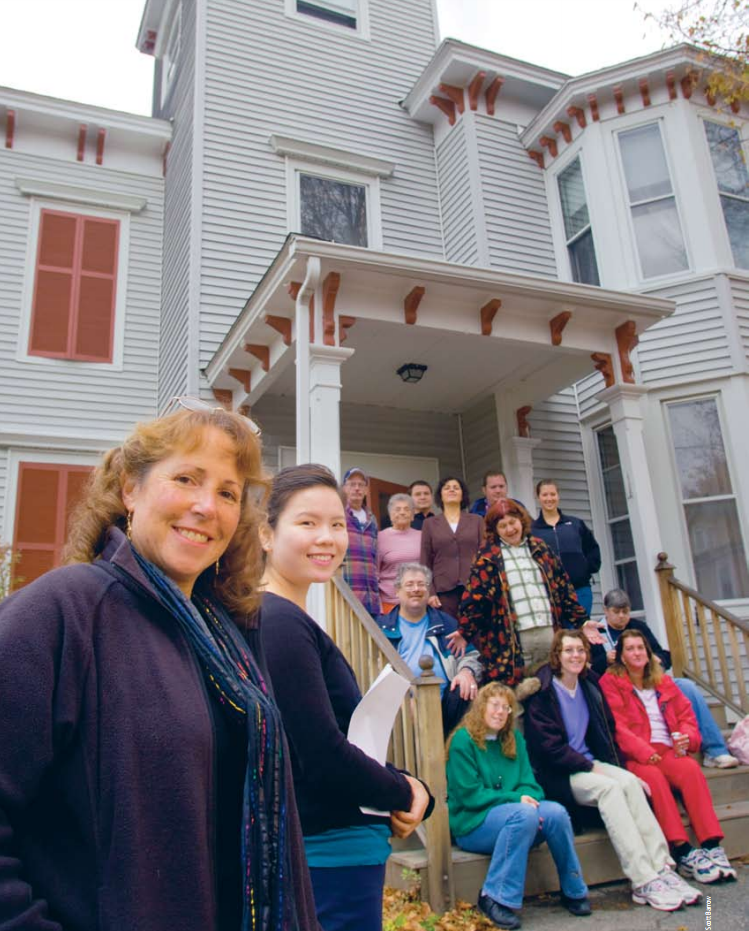 Heatherington (far left) with Annie Liang ’09 at the Transitions program in Pittsfield, Mass.

“It is one thing to read about … schizophrenia. But it is a very different thing to learn about the profound and diverse experiences of schizophrenia from people who actually have to live with it.” —Annie Liang ’09

A small group of fourth-grade girls was caught up in a cycle of fighting that could have escalated from the verbal to the physical. But Allison Burkett ’94, then a Williams senior working with a counselor at a Pittsfield elementary school, wanted to involve the girls in another kind of drama, casting them in skits based on Caribbean folk tales she was studying in another class. As they rehearsed for an end-of-semester show for their fellow students, the girls slowly learned to label their emotions, listen to each other and work together without raising their voices—or fists. It was heady stuff for Burkett, a psychology major who would go on to become a vascular surgeon in Atlanta.

Burkett’s experience was made possible by Laurie Heatherington, the Edward Dorr Griffin Professor of Psychology, who for 25 years has been sending undergraduates into unpaid jobs in the field through her “Clinical and Community Psychology” course.

With enrollment limited to 15 majors, mostly seniors, Heatherington interviews accepted students each spring and works through the summer to match each one’s particular clinical interests with an agency serving people with psychological and emotional disorders. The work ranges as widely as the needs of the people the agencies serve and includes helping bipolar and schizophrenic adults with housekeeping and shopping, working in early intervention programs for at-risk toddlers and providing more one-on-one attention to struggling adolescents than their public schools can afford.

“These are hands-on experiences,” says Heatherington. “Our students are closely supervised by the agencies’ professional clinicians, but they all do something helpful that engages them directly with people.”

The fieldwork is an important component of the course, which ties together readings and discussions on theory, methods and professional issues in community and clinical psychology. This particular mode of education, Heatherington says, truly combines the academic and experiential realms of learning, making them accountable to each other. “Students are required to read, critically evaluate, discuss and write about current theory and research,” she says. “At the same time they commit their time, brains and hearts to working outside of academia in hospitals, schools, clinics and other settings. … The key—and what makes this different from more standard ‘service learning’ and ‘internships’—is that these two realms are continually integrated by the students and professor.”

Students who go on to careers in psychology point to Heatherington’s class as the starting point. “We were thinking critically about what we were doing and the broader implications of our work and ultimately positioning ourselves to better address these challenges in the future,” says Justin Lavner ’06, now a Ph.D. candidate in clinical psychology at UCLA.

Maggie McDonald ’04, who is working on a dual master’s program in social work and social policy at the University of Pennsylvania, says the course “stimulated … my ability to observe and intervene in the arena beyond the ‘Purple Bubble.’”

Over the years, Heatherington has observed that students are humbled by the strengths of others who struggle with psychological problems as well as by the commitment of those who help them and the complexity of solutions. “They learn that the academic literature is a resource that contains the fruits of others’ experiences and that using it is essential. At the same time, they learn that ‘real-world’ experience sometimes teaches lessons that just can’t be learned as well by reading about them. And along the way, as their stories attest, they are often privileged to have contributed something useful at their placement sites.”