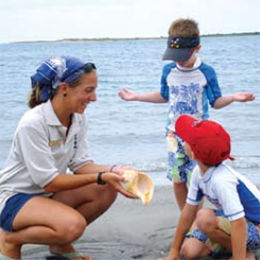 Williams sits well inland, but oceans powerfully impact our lives even in landlocked places. They produce much of our oxygen and food. They shape weather and climate patterns. And while it’s easy to assume that nothing we do could have a lasting impact on the vast, powerful expanses that cover three-quarters of the Earth’s surface, oceans are “seeing unparalleled changes … set in motion by human activities that commenced centuries ago,” says Jim Carlton, director of the Williams Mystic maritime studies program. Helping to untangle what Carlton calls a “maritime Gordian knot” created by habitat destruction, harmful impacts from fishing, marine pollution, invasive species and global climate change are several Ephs whose paths to marine careers ran right through the Berkshires (and, in some cases, Mystic, Conn.) 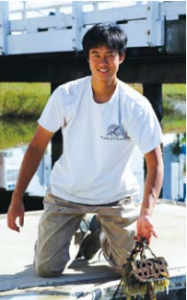 Andy Chang ’00 has studied the ecology of San Francisco Bay for the better part of a decade, but his biggest question about it may never be answered. “Every day I wonder what it looked like here before we started adding lots of non-native species,” he says.

Many human activities move living organisms from their native habitats to new locations. Sometimes it’s intentional, as when European explorers brought plants and animals to the New World for food. Other introductions happen by accident: Ships suck up marine organisms in their ballast water tanks, and woodboring insects cross the oceans in imported lumber. Under the right conditions these visitors can thrive, especially if they have no natural predators in their new locations. San Francisco Bay has been colonized by non-native species ranging from aquatic plants to Asian clams and European green crabs.

“Some invasives have huge impacts. The challenge is to understand why they do and others don’t, and to prevent new invasions from happening,” says Chang, who moved west after designing a marine studies major at Williams and analyzing aquatic invasions with Carlton. This year he completed a Ph.D. at the University of California-Davis, where he studied freshwater flow effects on “fouling communities”—aquatic organisms like mussels and anemones that attach to hard surfaces.

Now, as a postdoctoral fellow with the Smithsonian Environmental Research Center, Chang aims to better understand how more frequent and severe climatic extremes (such as fluctuations between wet and dry years) will affect estuaries like San Francisco Bay. “When we shift from wet years to dry years and freshwater flows diminish, the community in the bay changes a lot and can become dominated by one or two non-native species,” Chang says. Initially, he expects, these changes will impact rare species, but even dominant species will be affected as climatic extremes intensify.

Bio-invasions threaten fisheries and marine commerce around the world, but Chang hopes they can be managed. “Research helps us understand the effects of our actions, and we can change our activities to make them less harmful to the marine environment,” he says. 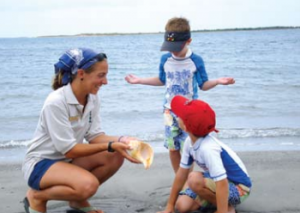 Elise Leduc ’06 is used to getting wet. At Williams the biology major headed Greensense, the campus environmental awareness group, and worked summers at the New England Aquarium’s Exploration Center in Newport, R.I. After a Peace Corps stint teaching aquaculture in Zambia, her next landing spot was the barrier island of Bogue Banks, N.C.

There, as an instructor in the Sound to Sea Program at the Trinity Center, a camp and conference center owned by the Episcopal Diocese of East Carolina, Leduc taught grade-school groups about the island’s salt marshes, freshwater ponds, maritime forests and ocean beaches. Students typically came for threeday infusions of basic biology and ecology in an outdoor setting. Many lived inland and had never seen the ocean.

Sound to Sea is secular but compatible with the church’s mission. “The idea of respecting the environment and loving all of God’s creations fits into their world view,” says Leduc, who recently started a master’s degree program in coastal environmental management at Duke University.

On the beach, Leduc would talk about the composition of sand, characteristics of different tidal zones and seasonal cycles like sea turtle nesting. Then she’d take her classes beachcombing for sting rays and jellyfish. Sessions at the Sound (the enclosed bay between Bogue Banks and the mainland) took place mostly in the water, wearing chest-high waders in winter.

Leduc also described human impacts on the oceans, such as overfishing and bycatch (accidental take of unwanted species, which destroys millions of tons of fish worldwide annually). “Students were shocked at how it all adds up,” she says. “We also talked about barrier islands and how they shift. Lots of people don’t really realize what force the ocean has and how it can actually move an island.”

Programs like Sound to Sea make Leduc hopeful about raising awareness of marine issues. “There are so many kids going through programs like this now, and a lot of teachers are starting to talk about ocean issues,” she says. “If we start early and instill love and respect for nature in kids, they’ll want to change things.” 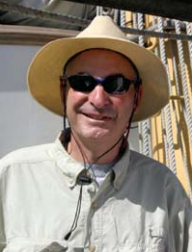 Eighty percent of California’s population (about 27 million people) lives within 30 miles of the state’s scenic coastline. To help ensure that coastal resources were used wisely, California created two agencies in the 1970s: the Coastal Commission, which regulates development, and the Coastal Conservancy, which works with public and private groups on projects like protecting land, building trails and restoring wetlands.

“We’re like a Swiss Army knife: we have a lot of different tools, and we look for problems to fix,” says Sam Schuchat ’83, who has been the conservancy’s executive officer since 2001. That can mean funding scientific studies, analyzing policy issues or supporting management efforts like the creation of marine protected areas. A political science major at Williams, Schuchat joined the conservancy after working as a community and union organizer and running several other nonprofits. But Williams gave him grounding in science, plus radio and theater opportunities that he still draws on. “I do a lot of public speaking and arranging events, and that was good preparation,” he says.

“There’s a lot of inertia about climate change and ocean impacts … but a lot of changes are going to be forced on us,” Schuchat says. Protecting California’s coastline and moving people out of harm’s way will be a massive undertaking, he predicts, comparable to the state’s multibilliondollar push in recent decades to make highways and bridges more earthquake-proof. “The question,” he says, “is whether we can start adapting before flood waters start rising.” 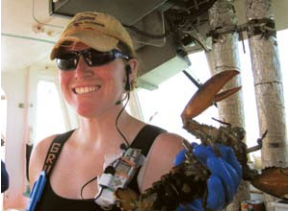 As coordinator of the lobster sea sampling program for Maine’s Department of Marine Resources, Kathleen Reardon ’00 puts trained observers on lobster boats to measure the catch, check for diseases and document the undersized lobsters and egg-bearing females that fishermen throw back. She also mediates between lobstermen and outside interests that could threaten the unique industry’s survival.

“Biologically the fishery is doing pretty well; economically, not so much,” says Reardon. A national recession and oversupply have driven prices so low that some lobstermen didn’t fish last winter because they couldn’t make money. There’s also pressure from conservation groups who want to reduce lobstering’s environmental impacts through steps like tethering traps with sinking ropes that won’t entangle right whales (but, some fishermen fear, may snag on Maine’s rocky seabeds).

“Lobstering is woven into coastal Maine’s cultural fabric. People fish in territories with limited areas, usually with people they know. Territories are bound in tradition, and fishermen are accountable to the person fishing next to them,” says Reardon. “But they don’t always understand scientific goals or see eye to eye with managers. Their whole livelihood rides on being able to fish with gear that works, and they have no control over decisions.”

After majoring in biology at Williams, Reardon received a fellowship from the Island Institute in Rockland, Maine, dividing her time between environmental education and lobster research. Then she earned a dual master’s degree from the University of Maine in marine policy and marine biology, writing a thesis on a sea crab fishery.

She says Williams-Mystic was valuable preparation for connecting fishermen and regulators. It also helps that she goes out sampling regularly with fishermen (she’s measured up to 3,500 lobsters in a day).

“There’s a lot of mistrust between government officials and fisheries,” Reardon says. “We need more people who can move in between.” 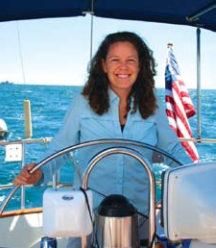 Most human activity involving oceans takes place in coastal areas that are growing ever more crowded. Traditional uses like fishing, boating and shipping compete today for marine space with new activities from whale-watching to offshore energy development. Some states, including Massachusetts, Rhode Island and California, are wading into the fray to draw up rules and recommendations.

“It’s land-use planning in the water,” says Betsey Nicholson ’95, a regional coastal management specialist for the National Oceanographic and Atmospheric Administration (NOAA), based in New Hampshire. Nicholson is NOAA’s lead coordinator for New England, a job that requires pulling together the right people from state and federal agencies, industry and academia to address problems that need to be solved on a regional scale, like invasive species and ocean habitat protection.

Marine spatial planning isn’t simple, but it’s increasingly necessary. “You’ve got dozens of actors with jurisdiction, so you need to streamline permits and think about what makes sense to do where in the ocean,” Nicholson says. “We need good data: what the ocean floor looks like, where the fish are and how projects like wind farms might affect the habitat around them. You put it all together in a GIS system and do compatibility analyses to see which activities go together and which exclude others.” Last year Massachusetts was the first state to require a master plan through legislation for managing state waters; Nicholson is representing NOAA in the drafting process.

An art and environmental studies major at Williams, Nicholson says she learned at Williams-Mystic how to apply policy, science, maritime history and economics to ocean issues. She spent six years with NOAA in Washington, D.C., handling Congressional relations, policy and budget issues. Now she focuses on the health of New England’s coasts.

“You’ve got to understand local culture and people’s sense of place to build relationships and solve these problems,” she says. “I get out sailing as often as I can, but my day job is around a table. That’s where you convene people to have these kinds of dialogues and find solutions.”

Jennifer Weeks ’83 is a freelance writer in Watertown, Mass.
Print this page